Do You Play Kick The Can?

I believe one of the secrets to looking and feeling young is thinking young.  During the labor day weekend I lazily hung around the house and flicked through the channels to see what kind of nonsense was on the boob tube.  Scrolling down the channel guide I came across the Twilight Zone. As a kid I watched these short shows repeatedly.  The episode was called "Kick The Can".

The story was about a guy named Charles Whitley who is an elderly resident of Sunnyvale Rest, a home for the elderly. It's not a happy place and Charles' hopes of moving in with his son David are dashed when he's told they can't take him in. He wistfully recalls his youth where they played kick the can and didn't have a worry in the world. His childhood friend Ben Conroy begins to worry him when Charles suggests all you have to do is wish it, and you can be young again. Ben is worried his friend will end up in the loony bin but it's Ben who is in for a surprise.

One night Charles decides to wake up the other aged residents and tell them about his idea of playing kick the can.  He convinces them that this will make them young again.  He also tries to convince Ben but instead he (Ben) alerts the resident attendant of Charles' intentions.  Rushing out to the front lawn of the resident home both Ben and the attendant are surprised by a bunch of kids playing kick the can. 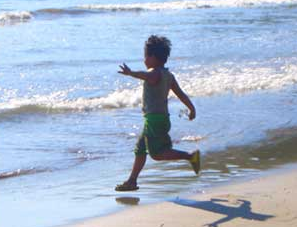 The moral of the story is the reason why many get old is because they think they are old and there is no time to be a kid again. There is a certain wisdom in those who believe they are just big kids.  They play, laugh and enjoy life like it is never going to end.  It's not too late to take a ride out to the beach and run into the freezing cold water or this fall take a jump into a big pile of leaves.  Whatever makes you feel like a kid again go out and do it!  Have a great Labor Day!